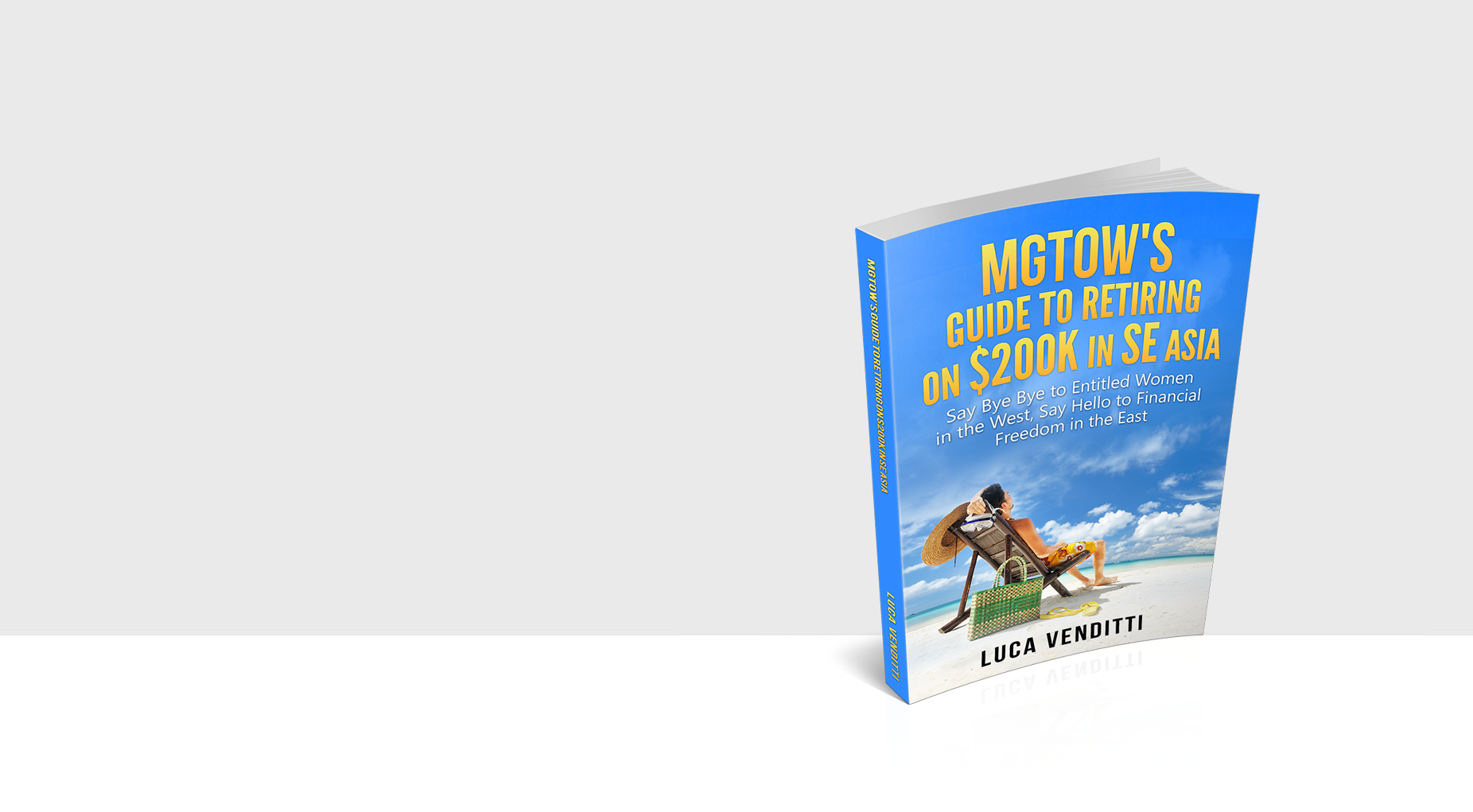 MGTOW’s Guide to Retiring on $200K in SE Asia

This book provides all the necessary information that a MGTOW man needs to achieve financial independence and retire on $200K in SE Asia. The critical topics covered in detail are the high-yield accounts that turn your savings into a guaranteed monthly passive income (interest) that covers all your expenses and grows with inflation, the detailed budget breakdown, and the visa process to allow for a permanent stay without taking up a job nor making any visa runs. The book goes beyond these critical topics and discusses various matters of interest for one considering the move including lifestyle, language, people, housing, food, medical and dental treatment, phone and internet service, vice, entertainment, women, and the prospect of a trial visit and of acquiring property and citizenship without marriage.

eBook in (4) formats: (1) PDF; (2) AZW3 for Kindle; (3) EPUB for Google Play Books, Kobo, Nook and various other eReader apps and devices; (4) Text-to-speech MP3.
Download links will be sent to the email address you provide on the checkout page. Please check your inbox and spam folders. You will have 1 download link for each of the 4 formats.

Description
This book provides all the details to help MGTOW men achieve financial independence and retire on $200K in SE Asia including:

Support
Please first check the inbox and spam folders for the email address you entered on the checkout page. If there is still an issue, then please email lucavenditti@outlook.com.

In my twenties, I had a live-in girlfriend whom I worshipped like a typical blue-pill simp. Unfortunately, the only thing she worshipped was the money I was bringing home with me. Although I never had definitive proof, in retrospect, I suspect she may have also worshipped Chad and Tyrone’s shlong. A favorite pastime of hers was spending all my earnings as quickly as she could so that she could impress her family and friends. I upped the pace running as fast as I could on my hamster wheel trying to keep up with her needs. Unfortunately, the faster I got promoted and got into positions I had no interest in, the more ways she found to spend the extra cash. Eventually, I just couldn’t stop hearing Tyler Durden whispering in my ear about working a job I hate, so I can buy crap I don’t need to impress people I don’t like — except in my case, my ex was the one doing all the buying.

Soon enough, my ex discovered a new hobby besides spending all my money: constant nagging about getting married and having kids. I was initially lukewarm to the idea, but as I started considering the possible implications, I stumbled upon the term MGTOW. I was very much intrigued and started bingeing on the content like an addict who’d spent too many days without his fix. Eventually, the lights started coming on in my head, and I was beginning to see things for what they were. I knew I needed to cut loose of my ex as quickly as possible. Unfortunately, she made this unnecessarily difficult and refused to pack up and leave from the place I’d been renting and paying all the bills for long before she’d moved in. I ended up paying for the remainder of the contract and packing up and leaving myself.

I wanted a fresh start, so I quit the job that I hated but had only sustained for the sake of sustaining my ex’s lifestyle. Unfortunately, I had virtually no cash left, so I went to live at my parents’. After some time spent getting my head on straight and consuming more red-pill content to wake me up from the blue-pill coma I’d sunk myself into the previous few years, I started a new path — doing freelance work and living a minimalist lifestyle.

As it became clear to me that the US and the West in general had become a feminazi haven full of entitled women, I knew I wanted to get out of there and regain my sense of freedom. I started researching my options and determined that Southeast Asia might be the answer for me as it hadn’t gotten fully taken over by the feminazi virus just yet, and it provided a very low cost of living, which meant I could potentially save enough money to be financially independent living there. Now that I had gone MGTOW and was no longer wasting my money chasing chicks or maintaining a relationshit, I knew financial freedom was within my reach.

I went on a long goal-driven trip to Southeast Asia and got a taste of the different countries in the region and what each entailed in terms of visas, banking, housing, food, entertainment, language, lifestyle and other matters. In the process, I discovered high-yield deposit accounts that many of the older expats had been capitalizing on for a long time as a form of pension of sorts. I did the math and figured out that if I hit the $200K mark in savings, I could then put my money in these accounts and would get paid enough in interest to live a fairly comfortable life there, and could even do it in a way that keeps up with inflation. With $200K to financial freedom as my goal, I lived a minimalist lifestyle and I worked as hard as I could so that I could save save save. All the hard work paid off by the time I was 33 when I finally made the permanent move to Southeast Asia and turned my savings into a monthly passive income giving me financial independence and the sense of freedom I’d been craving for so long.

Now I enjoy a simple but very comfortable life where I look forward to waking up each day and pursuing whatever endeavors I find myself most inclined towards. One such endeavor had been to write a book for other MGTOW men detailing how they can achieve financial independence in Southeast Asia on $200K of savings just as I had done. This was the fruit of much discipline, research, and experimentation around the region until I cracked the puzzle. The information in the book had changed my life and I genuinely believe it can significantly help other MGTOW men on their path towards freedom, independence, and self-actualization.